Who amongst us can't recall a science teacher unscrewing the top from a small glass jar and pouring a thick, shiny, silver liquid onto the countertop?

6 Reasons to Stop Using Clay Today
Absorbent Training: Lower the Boom on Big Spills
Three Ways to Get the Most out of Your Absorbent Sock 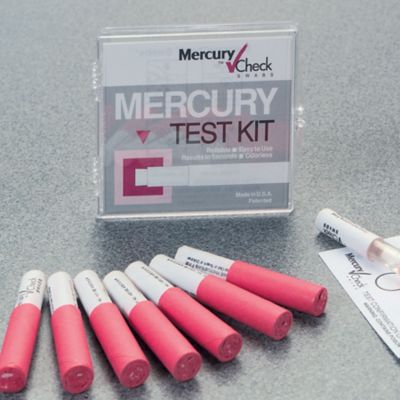 Who amongst us can’t recall a science teacher unscrewing the top from a small glass jar and pouring a thick, shiny, silver liquid onto the countertop? Remember watching the little droplets hit the table and shoot all over the place? Being young, invincible and unaware of its hazards, many of us poked at it with our bare hands, and smiled happily as it rolled around the tray. A few pocketed some to play with later. As we were ‘experimenting,’ some of this wonderful liquid inevitably got loose and dispersed into tiny, shimmering specs on the floor that quickly got shuffled under the tables and into corners. Who knew that a drop of this stuff the size of a pea could potentially make the whole room uninhabitable?

For many, a science class is the common ‘first exposure’ to mercury. A naturally occurring element, mercury is the only metal that is a liquid at room temperature. It can be found in soil, water, rocks, coal and animals; and can exist as a solid, liquid or gas. It is commonly used in thermometers, light ballasts, batteries and high precision instruments. Historically it has had many other uses, but most industries have now limited or eliminated its use whenever possible.

The ancient Greeks knew about mercury and its hazards. When mercury was uncovered in mines, the regular miners would be evacuated, and mining operations would continue using slaves, convicted criminals and other socially unacceptable individuals. These workers would seldom survive more than three years due to complications from their prolonged exposure.

In “Alice’s Adventures in Wonderland”, Lewis Carroll created an irrational character called the Mad Hatter. In the days before Carroll wrote this novel, hatters commonly used vats of mercury to shape felt or wool used to make hats. The chronic exposure to mercury vapours caused most of these people to develop dementia and other nervous system problems. Although the character is humorous in this book, the problem was quite real for many. Steam, starch and other methods are now used to shape and create hats.

One of the problems with mercury is that it volatilises fairly rapidly at room temperature, and its vapours are colourless and odourless. Because of this, many people can be exposed without knowing it. Exposure can occur when thermometers or fluorescent bulbs are broken. More commonly, you are exposed when you eat fish or other animals that have consumed mercury-laden plants or water.

When mercury vapours are inhaled, only 7% of the absorbed dose is exhaled. The balance is absorbed by the body, where it can affect many different organs before it is eventually excreted.

In small quantities, mercury vapours can cause headaches, coughing and poor coordination, among other symptoms. Chronic exposure can cause problems like nerve and kidney damage, memory loss, tremors and immune system damage. Levels of mercury can be detected in blood, urine and hair samples.

Children are more susceptible to mercury poisoning than adults. Medical journals have documented cases where lethargic children were brought to the doctor’s office for evaluation several weeks after a thermometer was broken in their nursery. Sometimes, the damage done to their central nervous system is permanent, resulting in mental and motor deficiencies. Other times, when exposure has not been as extensive, the symptoms go away once the mercury has been completely removed from the home.

Because mercury is a neurotoxin, personal protective equipment, including gloves made of polyethylene or nitrile rubber, splash goggles and chemically resistant aprons should be worn when working with or around mercury. Jewellery should also be removed because gold and silver readily amalgamate (combine) with mercury.

If this stuff is so bad, why do we still use it? Depending on the end product, there are many answers.

Small amounts of mercury are used in fluorescent bulbs and ballasts. Currently, nothing else has been developed that can replace it. Lighting manufacturers have made significant efforts in reducing the total volume of mercury in their instruments. Most bulbs and ballasts contain 70-90% less mercury than they did ten years ago. That doesn’t mean that they are no longer hazardous, it just means that they present less of a hazard than they previously did.

In thermometers and other precision instruments, mercury must still be used when specific, absolute information is critical. For home use, where multi-decimal, absolute accuracy isn’t as critical, alcohol based and digital thermometers have replaced the old mercury variety. Many pharmacy chains and supermarkets have discontinued or are depleting, and not reordering, their stock of mercury thermometers because of the known hazards of mercury, and because parents are buying other models which are often less expensive and safer.

Hospitals are starting to move away from mercury as well. Where mercury thermometers were once used to take a patient’s temperature, newer digital models almost instantly provide an accurate reading. Digital thermometers also help eliminate the need to quarantine and decontaminate an entire room each time this happens. Digital blood pressure cuffs are also gaining popularity and replacing the older wall-mounted models that can contain up to several grams of mercury.

Batteries are another source of mercury. Mercury-containing batteries power everything from hearing aids to guided missiles. They also commonly power smoke detectors, watches, microphones and video games. Most batteries sold to consumers end up in municipal landfills where they can cause environmental damage. Many communities have started collecting batteries and other household hazardous wastes as part of their regular municipal service, or on special mass-collection days throughout the year.

It only takes 25 standard fluorescent bulbs to contaminate a 20-acre lake. When lakes and other bodies of water become contaminated, methyl mercury builds up in fish, especially bottom-feeding fish. Air and ground pollution typically finds its way to the streams, rivers and oceans as well. As the fish eat, they ingest mercury, which builds up in their systems. Although limits are set, pregnant women and small children are often urged to limit their fish intake, especially in areas where local fish are caught by sportsmen and eaten.

What can I do if mercury spills?

When mercury spills, it scatters freely and rapidly. It does tend to stay in little balls, but some are so small you may not be able to see them. If you haven’t been trained to clean up this type of spill, it is best to close off the room, turn off any air circulation system that may transport air to other areas of the building, and allow someone who has been trained to properly tackle this chore.

For those of you who need to tackle these spills, here are some helpful hints:

Loading...
Newer Post
No second chances to get it right! Train yourself to stop, look and listen before taking action on a spill.
Older Post
Ignoring Your Corrosives Could Be a Dangerous Mistake